By Coach Ian Burman
This year at the Valentines Day Regatta, CBOT tried something new by adding a silver fleet team and providing a service to some of the next generation of Opti racers on the Bay.  We had 4 sailors participate and it was a great experience for them all.  All of these silver fleet sailors were relatively new to USODA regattas, travelling far distances to compete, and competing outside of green fleet.  the team met up Friday morning and, after getting our boats set up and ready for the weekend, we joined the CBOT gold team for a practice session to get tuned up.  The weather on Friday was relatively cold and windy for St. Pete and our sailors learned that they would have to dress appropriately in order to make it through two more long days on the water.  After practice, we completed registration, received our awesome regatta hoodies and headed to the lobby of the Hyatt Place Hotel for a fun team dinner, where we ordered take out, the kids played games and the parents caught up with one another. 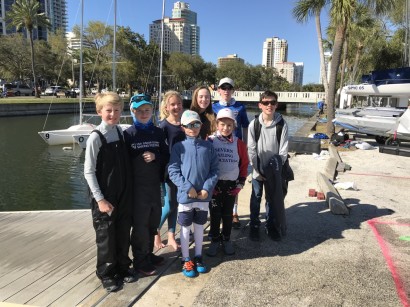 On the first day of racing, the wind started out from the NE at 14-16 knots with temperatures in the low 60s.  With an upwind sail out to the course, some of our smaller sailors were a little intimidated at first, but when we got the boat setups just right and talked through some techniques, all of our sailors were able to handle the conditions very well.  Daniel Draper came out on fire, getting solid starts and sailing very fast.  In race 1, the leaders all rounded mark 3 and headed off the wrong way.  Daniel, knowing the course, refused to follow and sailed on to mark 4, taking the lead and eventually winning the race.  throughout the day, the air temperature rose, the wind strength decreased and the current picked up, running against the wind.  The fleet had a number of general recalls later in the day, but still managed to get in four races.  Daphne Walsh closed out the day strong with her best race of the regatta, finishing 21st out of 85.  Daniel sailed very well all day and held the overnight lead.

Day 2 saw winds out of the NE again, but holding steady at 8-12 knots all day and temperatures near 70 degrees.  After a rough first day, Casey Burman changed her approach to the starts at the beginning of Sunday and saw her scores dramatically improve, posting a 17 in race 6.  Her older brother, Trey Burman started and ended the day with finishes of 24 to post his best scores.  Daphne continued to post more solid finishes and improved her overall standing throughout the day.  Daniel seemed to have great starts on the general recalls on day 2 and found himself in trouble on the line whenever the fleet started cleanly.  He was able to grind back through the fleet though and avoided really deep scores.  In the end, the most encouraging thing was seeing all of these sailors work together and keep a positive attitude throughout the regatta.  They all showed improvement and came away excited to keep learning and competing on the national level.  I’m excited to see them continue to get better over the coming years.

This site uses Akismet to reduce spam. Learn how your comment data is processed.